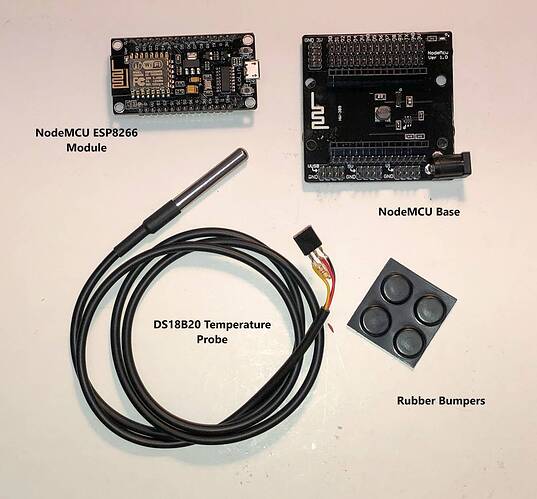 Want to learn some basics about IoT?
How to sense, track and visualize temperature data?
Curious as to the temperature in your dog house?
Then you may want to purchase one of these kits for $30.00 and start monitoring things!!!

You can find a detailed PDF build guide and the Arduino code right here:
https://zappedmyself.com/vhs/vhs-iot-sensor-kit/

If needed I can do some virtual workshops to help with any questions or issues.

For VHS members only

Ya I’d like to try that jazz how do I go about purchasing one from you ?

I’ll take one of these. kits

The reason I found VHS in the first place was I was looking for a way of taking the temperature of a lake and post it onto a web page in real time. After much searching I found tuxgraphics.org and bought a couple of kits from them:
tuxgraphics.org: Temperature measurement and equipment control over the internet My first sensor was a DS18S20 in the TO-92 format, so I had to shrink tube and epoxy everything up myself.

This also got my interest in electronics re-kindled, something I used to dabble in as a teenager.

A friend suggesed I take a look at something called an Arduino, which led me to the Vancouver Hackspace on 45 West Hastings and the rest is history.

I have since replaced the original kit with Arduino’s with ethernet shields as the harsh winters and elements cause the board to fail every few years. I use a “home brew” PoE to power the board by using a 5v wall wart and using the spare ethernet pairs over a CAT5 cable I buried underground down to the lake. I have a Linux box in the house that does a “wget” and dumps the output into a file. The script that grabs a webcam image from my IP camera inserts/embeds the temperature into the image via the ImageMagick “convert” command. It’s worked well over the years

Just eTransfer me the $$ and I’ll drop off the kit…

One for me too please. I need to get a punchcard… (will interac you the 30)

@3bien, @SteveRoy, @TimothyKonrad
Your IoT Sensor kits are on the drop box…
Make sure you get the most current guide and code from here as I found some errors in the previous versions:
https://zappedmyself.com/vhs/vhs-iot-sensor-kit/