Back when he had more time @TomKeddie ran a bunch of workshops for various projects and made up the accompanying PCBs… Tom has donated his stock to the VHS. Here are the PCBs that we have and links to info, build documents and/or workshops… Let me know what you want and I will drop them off for you.

Rather than totally hijack the @TomKeddie PCB thread I have started a dedicated one to the Bus Pirate builds… @TomKeddie has some of the Bus Pirate PCBs available HERE We have a BOM setup at Mouser listing all the parts HERE. It looks to be about $20.00 worth of parts. I have an order for Mouser I’m putting in next week. If anyone want me to purchase kits of the parts let me know. The Bus Pirate is useless without a cable set to connect to things. I know you can get them offshore for ch…

The original Adafruit Motorshield kit is one of our most beloved kits, which is why we decided to make something even better. We have upgraded the shield kit to make the bestest, easiest way ...

SMD June - FET driver board for raspberry pi or arduino

This is another of the regular surface mount solder workshops I'm holding at vhs.  In June we'll be building a 12 channel FET driver board for either Arduino or Raspberry Pi.  You can find out more about VHS at vancouver.hackspace.ca. At...

PCB designs from vhs events. Contribute to vhs/vhs-pcbs development by creating an account on GitHub.

The dangerous prototypes logic pirate is a new 8 channel logic analyser design from the home of the bus pirate.  It uses the open SUMP protocol supported by the ols java client software (Mac, Windows, Linux). This...

The SparkFun EL Sequencer is a board that contains an Arduino-compatible microcontroller, and circuitry for controlling up to eight strands of [electrolumi

For anyone interested I have dropped off the PCBs at the Space…
I put them in a small plastic container in the (now very cleaned up!!) parts shelving… 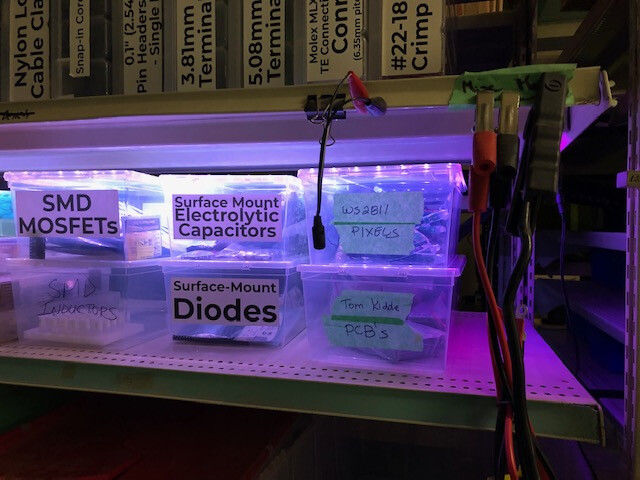 Thanks and thanks to @TomKeddie - I’ve learned loads working on his boards.