People often ask me, “Jarrett, what is the Best Thing in Life?”

I’m not sure why people keep asking me this, but depending on my mood, the answer is one of two things: Floating on a lake, or swinging in a hammock. At peace with the world.

Frustrated by this bounty of choice that I just couldn’t narrow down, I began righting this wrong in the world.

So I bought a boat. 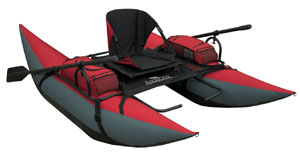 And I bought a hammock. 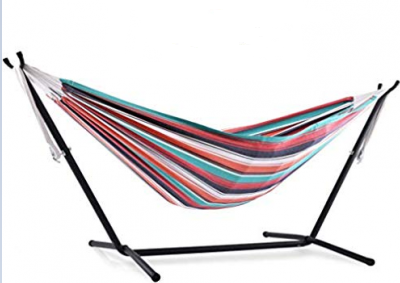 And I bolted them together. 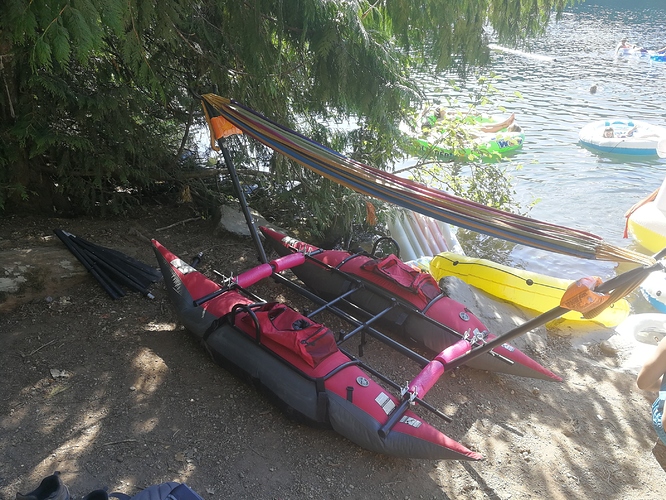 It even got me a sweet discount on the boat. 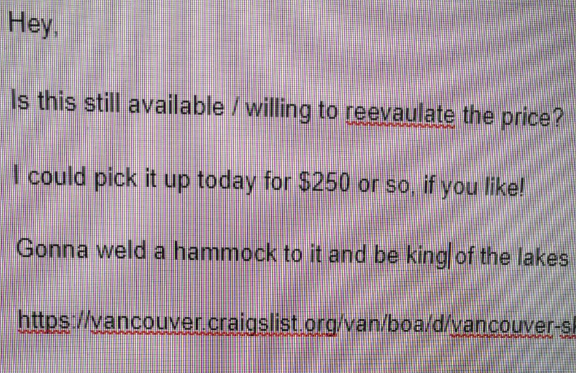 In truth, it actually took several false starts to build this successfully. Part of the challenge was that I wanted to avoid making any permanent modifications to either of the two structures, and the other part is that, while taking time to think about the problem, well, I had a hammock in which to mull over design decisions. It’s nigh impossible to get up out of those in a timely fashion: fact.

The hammock frame is made out out of steel tubing, but the pontoon boat’s frame was aluminum. This made things a little challenging. No welding, really.

My first attempt used some of Metal Janet’s steel flat stock (discussed with her – the rest will probably go to more VHS window projects? Something rad, anyway)

I used the hydraulic press in an only sort-of-sketchy set-up to bend them in a half circle to go around the hammock frame’s steel tubing. 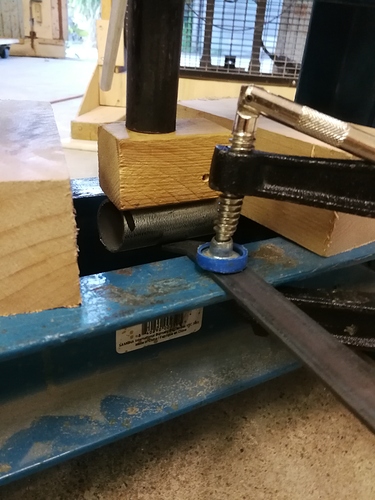 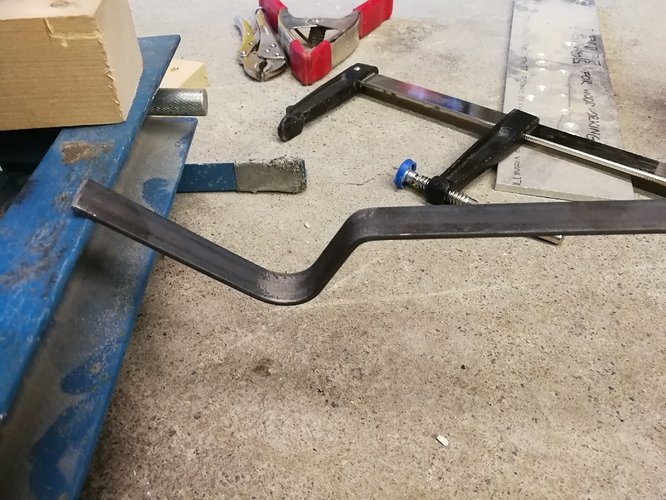 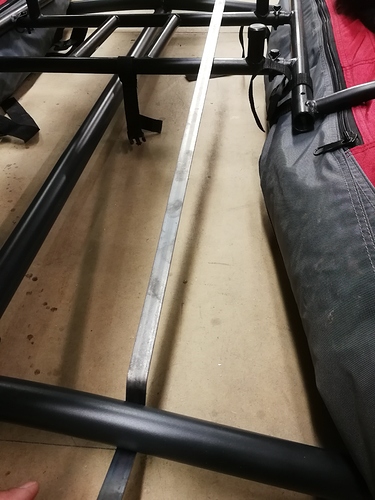 That made me sad, though, look at those bends! 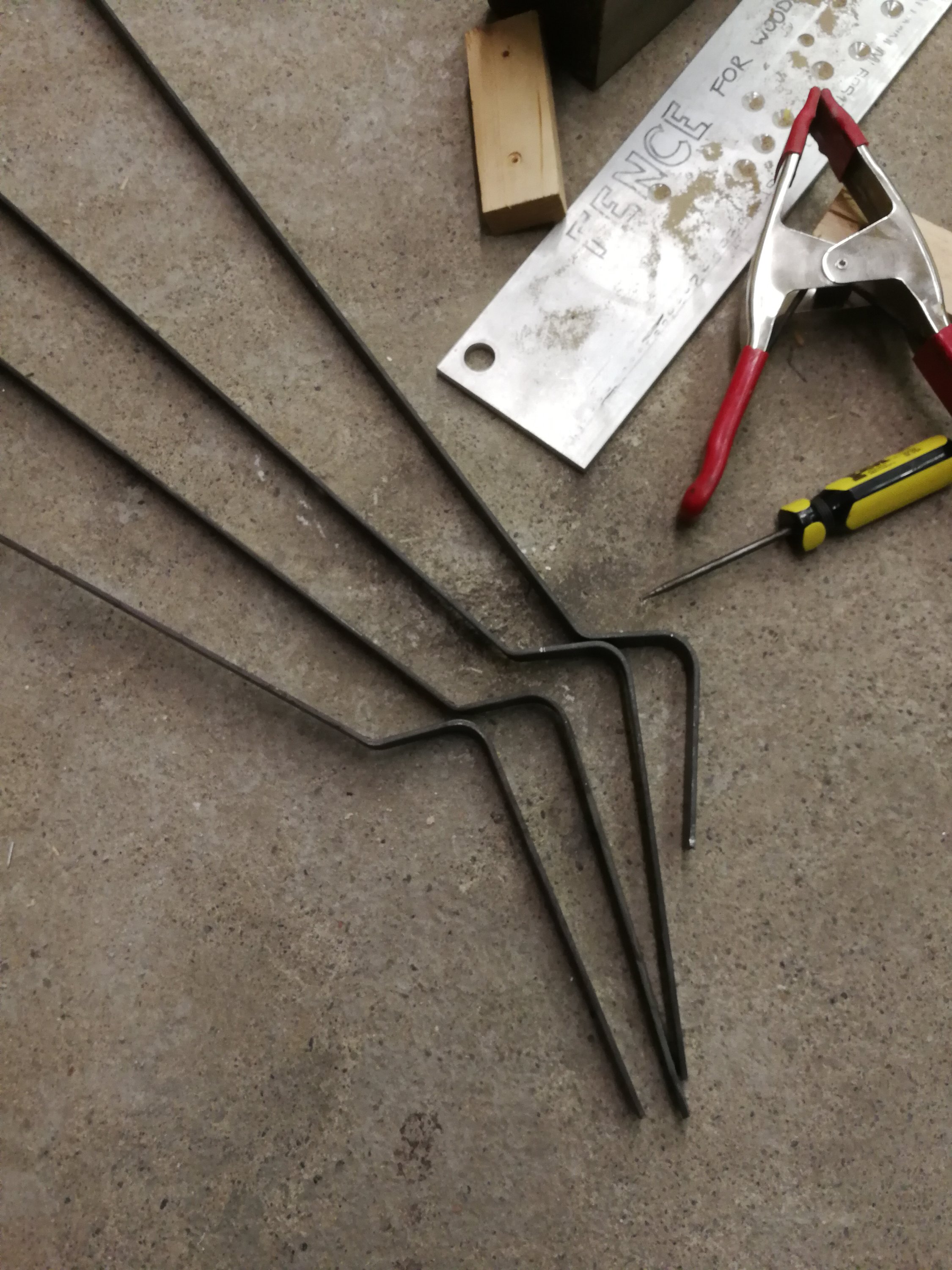 In parallel with the above, I also picked up some straps and built a method to fasten them around the pontoons.

Aluminum tube, a slit, and some filing (oh so much filing) did the trick, along with some new holes, bolts, and cotter pins. 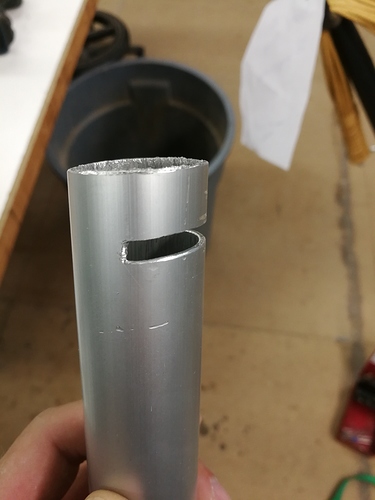 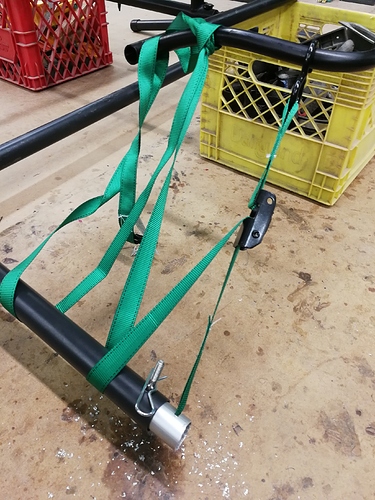 Also positioning the whole contraption without mashing the pontoons against potentially sharp VHS floor was tough. I finally settled on this lumber solution, which helped me see the final fastening solution. 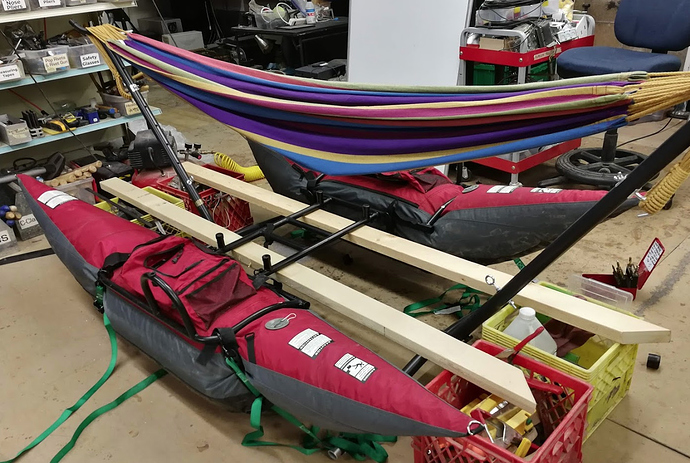 Back to the scrap bins, I found nearly the identical black anodized aluminum tubes that the pontoon boat is made out of. They slot right into the existing frame and couldn’t be more perfect. I hear they’re from an old bedframe.

First I tried to bend one. 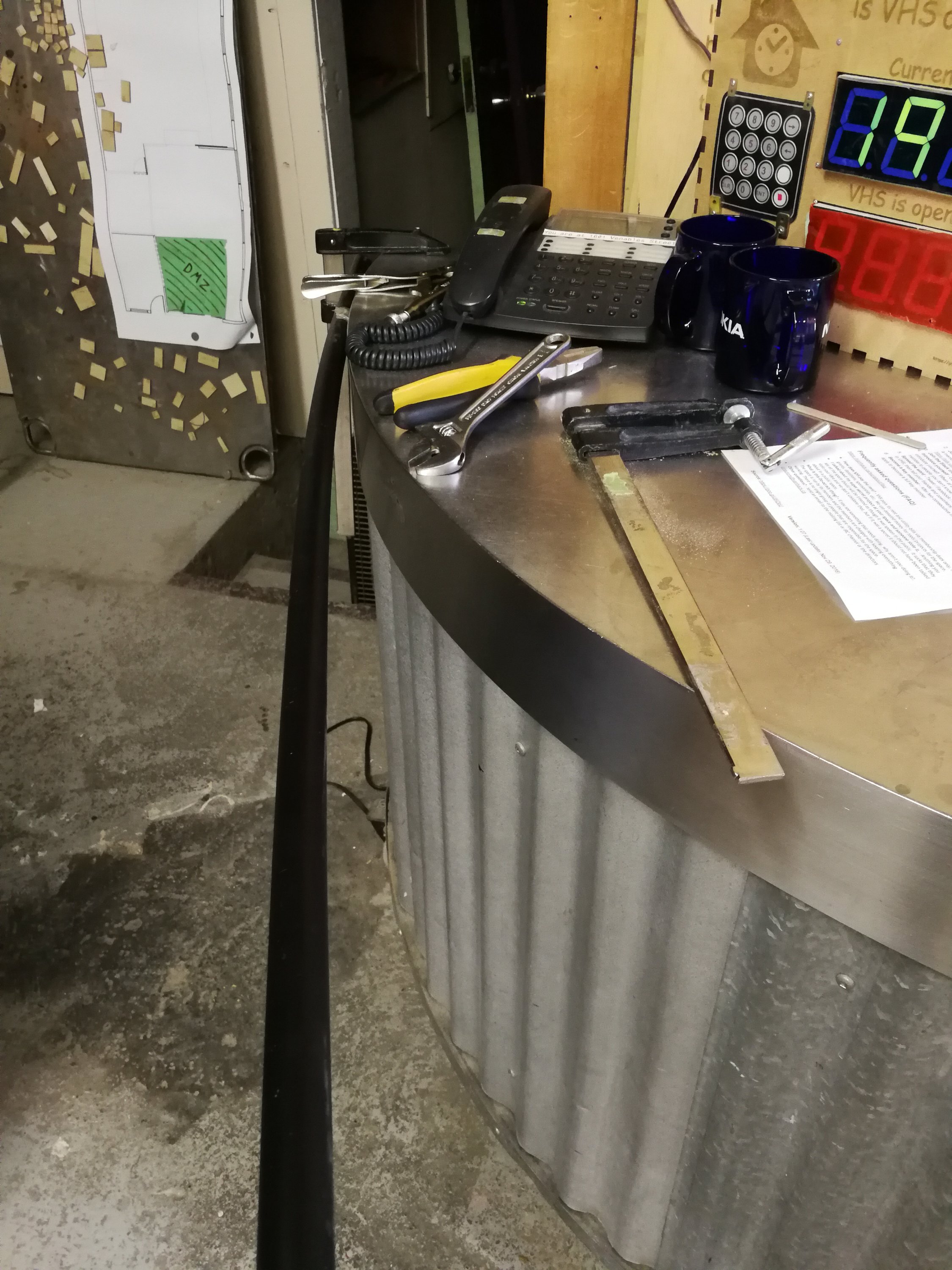 Then I tried harder to bend it. 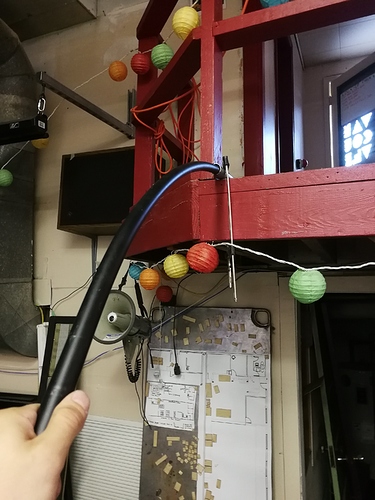 Naturally, I kinked it, but I continued to try to bend it, this time using the gorgeous centrepiece in our garden. 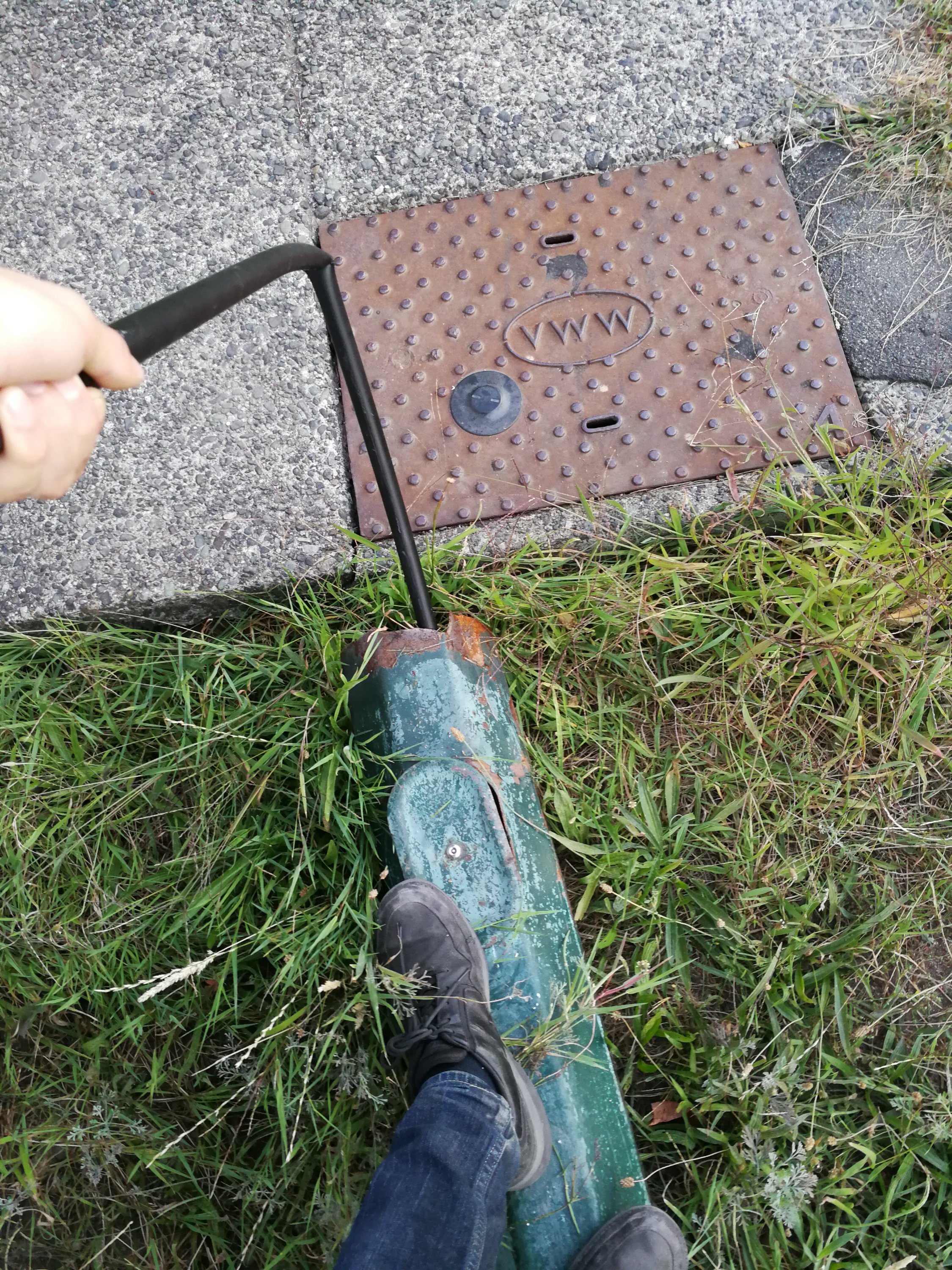 I still couldn’t get the bend angles I needed! Just not strong enough or heavy enough or clampy enough! I abandoned that attempt.

So attempt number, whatever.

I tossed two more of those scrap tubes into the boat frame, and clamped it on with some u-bolts. 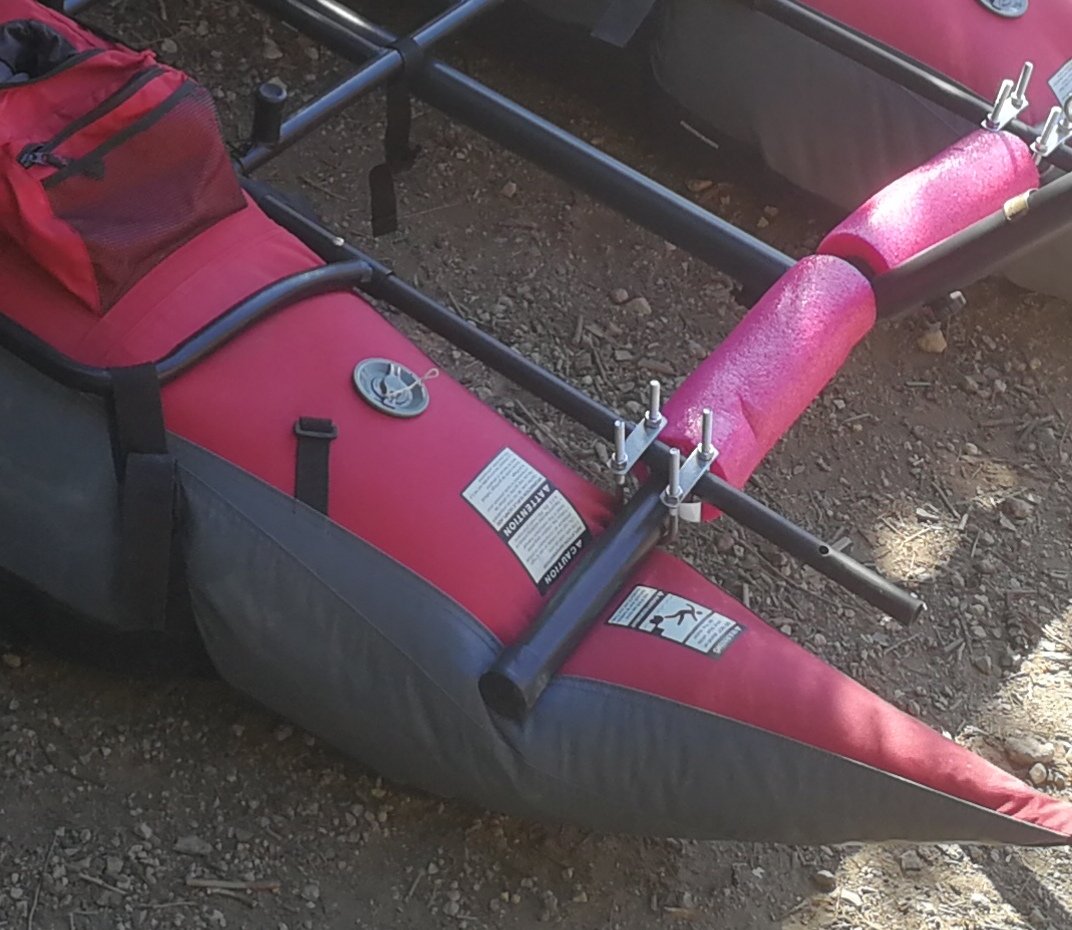 Well that was easy. It brought the hammock a liitttle higher than I really wanted, but I decided to take it to the lake and gopher it, fixing everything in rev 2 if it was a disaster. Summer is running out.

Before launch day, and with much thought, and much more relaxing hammock meditation, I decided that the boat tooootally had enough side-to-side stability, and that I’d have more issues front-to-back. This is because the hammock in resting position really wasn’t too much higher than the original boat’s seat, but the leverage on the hammock’s mounting points was way further out than the pontoons.
This later turned out to be completely correct.

But, burn that bridge when we get to it! Will probably add an outrigger to the back of the hammock frame. The water wings and pool noodles are not intended to be used, they’re just there as a last resort hammock rescue device, which we didn’t need.

And grab Rob and another friend and off we go. 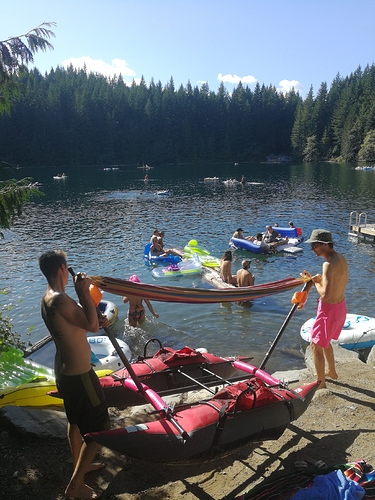 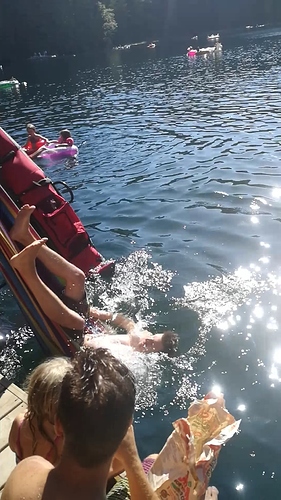 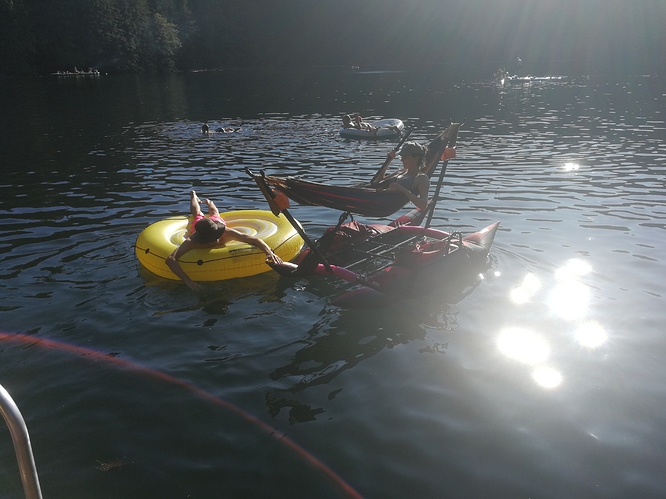 A hammock attached to a pontoon boat - who knew it could be done?
Now you can float on a lake and fish from a hammock

I bow to your design and hacking magnificence!

I just started reading this on a text only client and now I’ve got to read
the whole thing in all it’s graphical glory, sounds like a pretty sweet
project!!!

I am a staff writer at The Log newspaper (a boating and fishing newspaper based in Southern California), we run a fun, sort of out-there story in every paper. We saw this and thought it was great. I was wondering if you could give us permission to use one of your photos to go along with the story? We will credit you for the photo.

Let me know, thanks!

That’s hilarious, go for it! Thanks for asking, and send me a link / picture when it runs

Great thanks! Will do. Curious if I could get your last name for the story? As well as the name of the lake you tested it out in?

Rainier, and it was on Cat Lake in Squamish, BC

Ha, legend! Looks like stabilization could be an issue but Im sure a few tweaks could fix that.