Laser Engraving Tests (The Search for the perfect gradient)

Last night, I had an all consuming need to understand the best way to laser engrave something. The idea is to find the best way to engrave a grey scale image on to a surface that best preserves the original image.

The original hope is to find a laser setting that would read the grey of the image and modulate the power level based on the darkness level. After a lot of searching, this process is called 3d engraving, and I could not find a LaserCad setting that would allow for this. It is possible in theory however I only found example of it as a Corel Draw plugin. If someone knows how to achieve this, please let everyone know.

When I talk to laser user at the hackspace about this, people will point at the Rhino test piece, however I found the original Rhino file, and it was not grey scale image at all. It was a cross hatched picture and the cross hatching gave the Rhino it’s depth. This points to the possibility of using photoshop or gimp to generate a cross hatch from a greyscale image and engrave that of a stylized look, I will try that at a later date, but it is not exactly what I am looking for.

So if I just import in a gradient from white to black and just start engraving, what happens. Nothing good. Laser cad simply engraves everything that is more then 50% black and ignores everything less then 50% black. So you end up with half the rectangle filled and half left untouched. So that does not work.

Most example I found on how to engrave grey scale images involve dithering, which is converting grey images into pixel of all black or white values. Luckily, Laser cad have a built in dithering option. Clicking on it opens a dialog box which asks for a pixel size. Testing shows if your value is too low, you lose the bottom 20% of your greys, and 0.3mm dithering offers the best result. I made a test piece showing the impact of different dithering sizes on a grey gradient, and that is beside the laser computer as reference.

So then I decided to test out another thing I have seen on the internet, which is to deliberately miss focusing your laser to provide a wider beam. the goal is to get rid of the pixelated look of dithering. After much testing, I found that if you put a piece of 1/4 inch plywood under the focus gage, and focus it on 0, you get pretty good results. this results in the laser being focused 6mm above the work piece, more testing can go into the impact of miss focusing the laser, but 6mm out of focus (OOF) seems like a good starting point.

This is when I found scan width option. It turns out you can tell LaserCad how close you want your scan lines to be. This defaults to .1 mm and I have found no advantages to make it smaller. I have tried 0.05 and 0.023 mm, both resulted in a worse gradient.

Finally there was power level. After testing a few power levels, I found that 15% power gave the best gradient. More testing is needed but as I only testing 15% and 24%, but it was getting pretty late and I was getting tired. However this gave me this gradient pictured here which made me pretty happy. 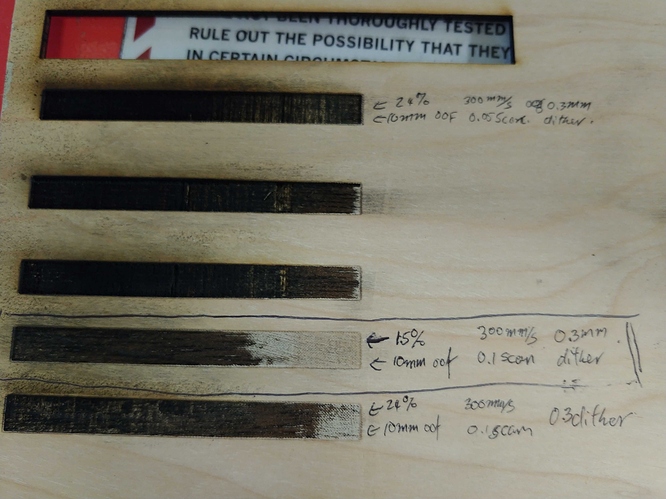 So the final setting I stumbled upon is 15% power, 300mm/s speed, 6mm out of focus (OOF), 0.1 scan width, and 0.3mm dithering. This provided the best gradient. I have a feeling that somewhere in this 5d search space is a better setting. Specifically, there should be an interplay between dithering size and scan width, and OOF level. But I was pretty happy with the outcome of the testing.

There is a lot of room for other things to try like the impact of preprocessing with photoshop or gimp. I will test on other material as well. If you are interesting, please join me in doing more testing in search of the best engrave possible. Please make well labeled test pieces, and include as much settings as possible. Feel free to ask me if you have any question about where to find all these settings.

this may be of use: Laser etching a full color image

I actually saw that. It is where i learned about dithering. Great instructable by the way, (might want to update the URL links to Vancouver hackspace in the instructable post). Everything in that post makes way more sense once I took the time to work with the laser. when you are at the space one day, I would love to talk about the setting you have tried, and take a look at those original test plates if you still have them. Did you ever test out the half tone settings in GIMP? How did that turn out?

One reason I did my own testing was because I actually wanted to control how much material was being removed. This is actually the first step as i want to do 3d engraving on foam. I will keep you guys posted on how that testing turns out.

Thank you @yeungx and @miststlkr for running these tests and documenting them so well!