Where to install our video wall?

So for those of you that are unaware we were recently gifted an LED video wall, and its awesome.

More info about it here: LED video wall, donated by the Vancouver Aquarium

To sum up it consists of: 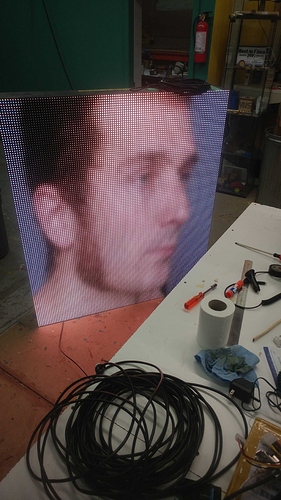 Constraints for where we put these:

A modest proposal:
With all that in mind the hive mind that was sitting around the hackspace the other day came up with an idea to mount them behind the second couch, facing the side door but mounted on a hinged pivot, allowing them to swing through 90 degrees and face the towards the woodshop. 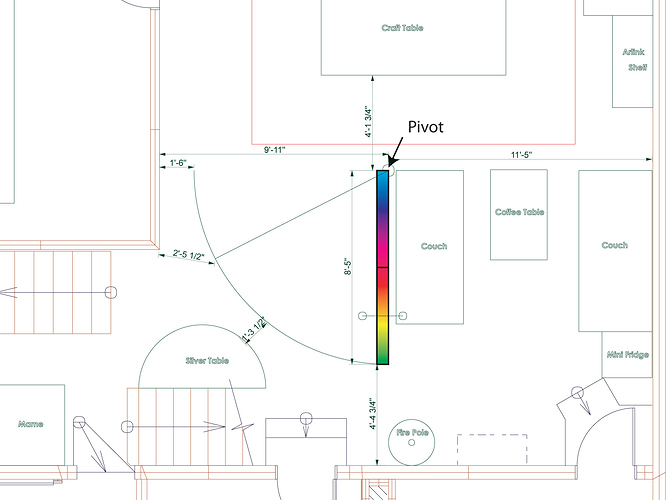 Reasons for this idea:

Things that would have to change:

I hear those things are awfully loud:

But what about sidewalk pong through the front windows?

Isn’t there more important projects at the hackspace that need doing?

Anyone got a better idea of where to put this?
We looked at some of the following options

So yeah, let me know if you have a better plan, and post it below.

I guess it’s too heavy or top heavy to put it on a frame with rollers to enable it to be moved anywhere?

Oh yeah its going to be heavy, about 480lbs for the screens, plus the steel support frame, casters etc.
Also the height will just clear the one spot, you cant move it up onto the wood deck or under a vent.

We could swap to a 2x2 grid rather than a 2x3, takes the weight down to 320lbs, and shrinks the size and resolution accordingly.

The smaller size set up for portability would have to have big support outriggers as its not tied into the ceiling and floor, and also would need more steel in its frame as its subject to more stress, could make the weight almost a wash. Plus have a way higher risk of tipping.

Okay, how about another idea…
Talking with @lukecyca the other day he suggested using the screens to build a dividing wall beside the laser, plan would be to build it 2 screens wide and 3 high with the screens mounted sideways. result would be a video wall 101" long (basically the distance from the laser to the laser material storage rack) by 132 high (almost to the ceiling). 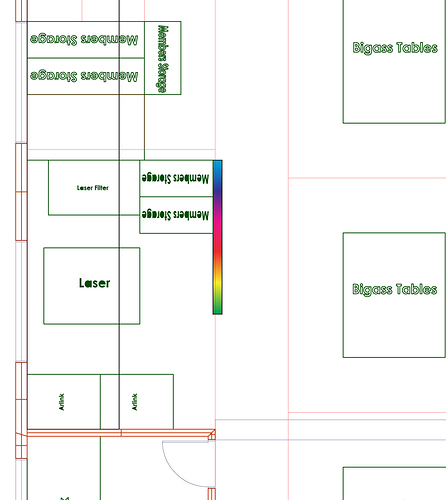 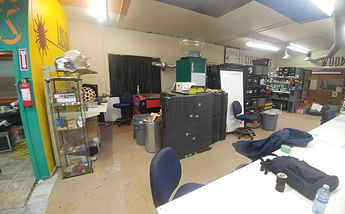 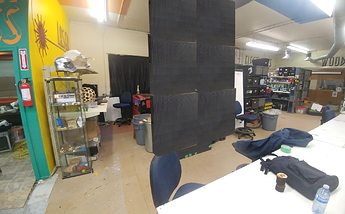 im here at the space right now and as i have been walking back and forth past these units, i had the same idea. only in my head it was 2-3 wide by 2 high and set up off the floor a couple of feet.

If we ran them 3 wide it would be 132" so it would be a little tight on the existing member storage end. height would be 101" so that would give you about 3" of slop to put on the floor or ceiling.

I was planning on mounting them sideways so its 101" x 132". If we ditch one row that gets us to 88" so 2’ on the top and bottom ish. Which actually is a better aspect ratio…

I think 3 wide would be awesome. Then this jumbotron could maybe be used for presentations (instead of a projector).

It would require reconfiguring the shelves somewhat.

lets do some more mapping it out and see what we can make work.

Another option would be to mount a 2x2 screen grid on wheels so we can move it around, my thoughts were to use a couch as a counterweight and tilt the screen back a bit to keep the CG in the triangle.

A permanent big screen would have support legs under it to keep it from tipping (these could be snuck under the floor boards to remove the tripping hazard) and probably a safety up to the rafters (once I hear back about the safe loading specs for those rafters).

Not sure how well this would work for presentations, the resolution is pretty damn low, but the awesome factor is pretty high.

Attached a DXF of the space (ish, some of the table sizes are wrong for the big tables and some stuff has moved). If people want to play around with layouts.
space layout - jumbotron.zip (178.4 KB)

we’d be able to pull the end arlink bench out and roll the laser through - with the ventilation being very fixed, the laser is already a pain in the ass to move, this doesn’t seem like it would change that.

So its come to light that there are a few members looking at reinstalling more windows and perhaps moving members storage to take advantage of the natural light thus created for a better work space.

As a result I am now hesitant to put up a giant fixed LED sign barrier towards things getting moved and shifted and improved in the shop.

I ran the stability numbers and found that despite my earlier instincts a mobile cart can be done, it would be reasonably quick to build, stable and safe. It would consist of 4 screens, stand roughly 8’8" high (thus fitting under any pipes in the shop), sitting on a base 5’ wide. It would look something like this (bracing and details to be worked out later but yes the signs would be rigidly attached to the frame, and it wont be flimsy): 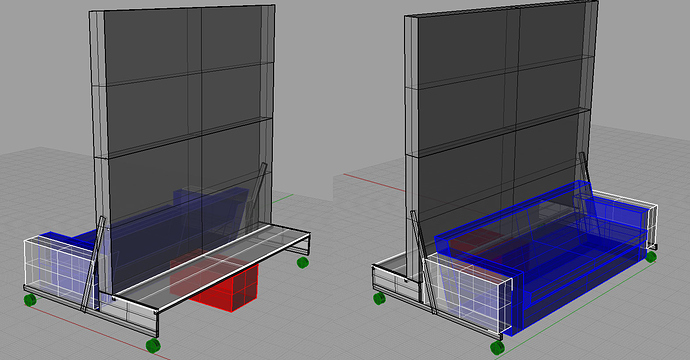 Yes that is a couch attached to it (as a side bonus, this would raise our way to low couch so the seat is level with the normal couch). The plan is for this to live roughly where that oak desk junk catcher behind the lounge lives now. And yes under the bench behind the couch (which is basically an instagram trap #VHS-Selfies) is space for another 5 or 6 valuable floor level bin storage spots.

size-and-stability.jpg940×792 59.1 KB
As for stability, I assumed worst case ontario here, with the frame and the couch being essentially weightless and all the mass concentrated in the sign putting the centre of mass (CM) about 6’ up. Even with this and the casters rolled inwards you’d still have to pick up the couch side by more than a foot to get the CM outside of the base triangle. In practice, once we add more weight to the frame, plus the 100lb couch, the CM will shift down and to the left rendering this thing very hard to tip indeed.

The casters should only be carrying around 142 lbs each (320 sign, 150 steel, 100 couch ish) which the wood floor should be able to support (that softspot by 3d printing notwithstanding).

This thing is not getting attached to the structure, and will take less than 4 hours to undo with an angle grinder if everyone hates it, so barring any major reasoned objections we are going to doocracy this to get at least 4 of the signs out of the way and doing something awesome. (please suggest below what to do with the other ones… )