Progress isn’t always obvious, so I thought I’d give an update.

John C has kindly brought down his CNC again (with help from @lukecyca). It looks like he’s done some tinkering, too. There’s an awesome monitor mount, and the controller has a slick rackmount box.

@rsim, @Lukeo, @Rob_MacKenzie, and I did a bunch of work installing LinuxCNC on the computer, figuring out how the controller works, wiring up all of the limit switches, and then figuring out config settings to make it all work together.

I also had to take apart a motor to fix a connector.

It was probably, I dunno, 50 person-hours. I have a talent for underestimation.

But now the the CNC mostly works!
All of the motors can be jogged. I’ve disconnected the Z-axis because I broke a limit switch (anyone have a spare N/O limit switch kicking around?), but you can home the X and Y axis in LinuxCNC, and then it zeroes them until it hits the limit switches.

Where we’re at now:

So the majority of the work remaining will take place in software. If anybody wants to play around, the username/password is linuxcnc
On the desktop, CNCSherlineRob is the file that opens up the controller software. LinuxCNC looks really similar to Repetier-Host that a lot of the 3D printer people will be familiar with. I don’t think it’s a huge paradigm shift.

Thanks to @Jarrett, @JohnC, @lukecyca, @rsim, @Lukeo and @Rob_MacKenzie for
investing the time and effort to bring another valuable resource to VHS!

– The axis homes until it hits the limit switches, and then it stops moving… Because the limit switch is hit. Figuring out how homing is supposed to work and set it up accordingly

I’ll try to take a look at this tonight - it should have similar options to Mach3 for this stuff (basically hit home switch then back off slowly until the home switch disengages).

– Zap-strap a Sharpie to the Z axis and get it to draw something?

There used to be a small chuck for the spindle; if we can find it, no zap-straps required! Something I’ve done is hack a clicky ballpoint pen into a sprint-loaded pen for learning, so you don’t have to worry about applying too much/little pressure or breaking the pen. We can easily knock up a bunch more of these as they’re super useful.

A bunch more people have been working on this, off and on.

@Daniel_DeGagne and @iMakeRobots (the Double Dan) have been been puttering around with it.

I did this yesterday. 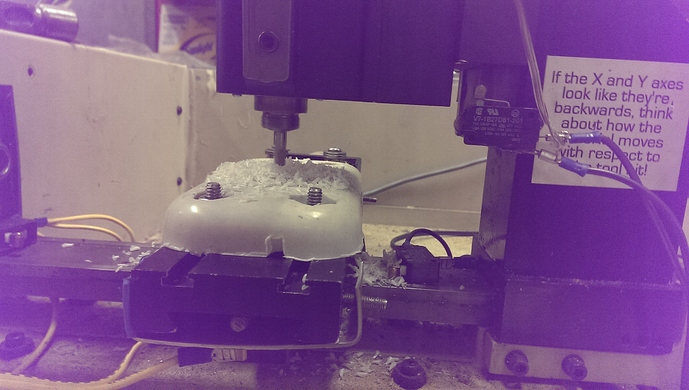 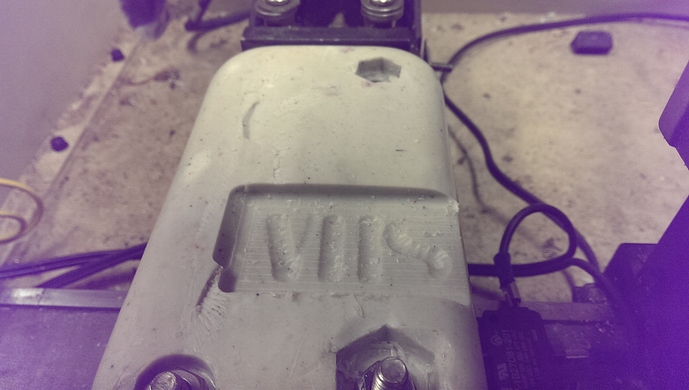 It’s a little crappy because of two reasons:

I just used a python script from the internet to treat the VHS logo as a depth map. It took like, two seconds and gave appropriate results.

So the following things are on the to-do list (@iMakeRobots contributed some of these):

About that last one, the 3D printer people especially could be pretty good with that. Turning a 3D model into g-code is familiar, but it’s a little bit different with the CNC.
The g-code itself is easier (no extruder, hot end, etc), and the process is much much harder. Fully automated g-code doesn’t really happen because there are a lot more factors involved. There’s position and dimensions of the tool (which will be different from job to job), roughing and facing operations, there’s avoiding cutting workpiece clamps or hitting the bed. And so on. It could be a fun challenge

It was Autocad Fusion Bruce and Richard were testing today? Be good to know if that’s a suitable program once we’re at ~100%

And yeah gcode files would be much smaller and simpler. BUT where as 3d printers extrude a simple ~0.4mm line of filament in a complicated pattern, a CNC has a simple path carefully created to deal with the more complicated job of doing cuts based on tool shape, cutting speed. angle, depth, etc . So a good program to program the milling paths will be good for us. I don’t have experience (yet) to try messing with the actual cut paths.

Also note to anyone who has yet to look at the controller for the small CNC. Careful the current is much higher then a printer. The large one I believe Richard has been setting up an Atomic pile in one of the empty offices to power it.

Yes, Richard was patiently introducing me to Autodesk Fusion 360. They offer a free license for hobbyists and enthusiasts. Very slick software, but not easy to just pick up and use immediately.

I’ve been using the CAM portion of fusion360, and it is great. Lots of
videos available online as well. There should be a suitable post processor
available for the sherline machine as well. If not. We can put in a
request, and they can make one for us.

What collets does the machine use? R8?

@rsim the switch position should not be the same as the home position in emc2. That way the machine will back off the switch and avoid the workflow problem. I set it that way about two weeks ago. Apologies if this is old news.

To me the enclosure is a safety feature for people without face shields and a way to keep the debris to a minimum.

Please add “build a rasbpi lockout for the sherline same as the laser cutter” to the todo list.

What collets does the machine use? R8?

I have no idea!

I’ll have to see that in person. I don’t recognize it.

I found this http://www.sherline.com/3060pg.htm seems the Sherlines are all standard?

Standard to their OWN standard!

I meant standard as in the Sherlines where/are all the same. As we have both the cnc and the small mill. No idea what the industry standard is if there is one.

Tried to use the sherline last night. Login written on the monitor did not work. What is the correct login now, please?

So the majority of the work remaining will take place in software. If anybody wants to play around, the username/password is linuxcnc

No idea if this u/pwd still works

Here is a link to the Sherline CNC mill page on the Wiki.

If you know the new login/pass, please post it here.

We just reset it with init=/bin/bash. So posting (old) username and (new) password before we forgot again:
user: vhs
password: vhs

The root password was reset as well, but I don’t know if it should be posted here?

So now that we have safe movement on each axis confirmed…

Mad props to @lapk and @Majicj for getting the password reset.

I Can program in Fusion360. IF some one will share the post that they use
that would be grand