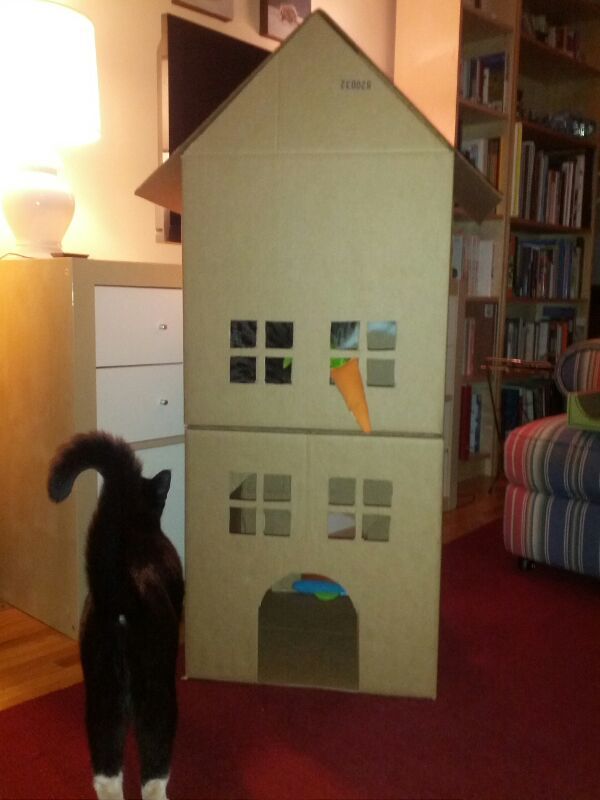 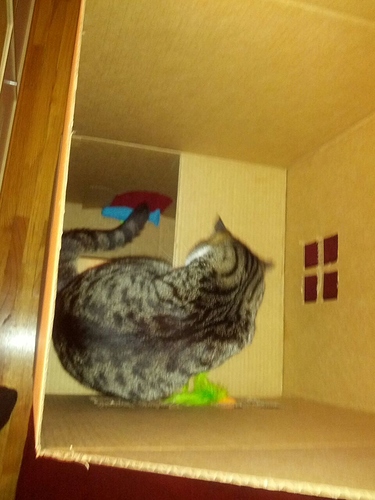 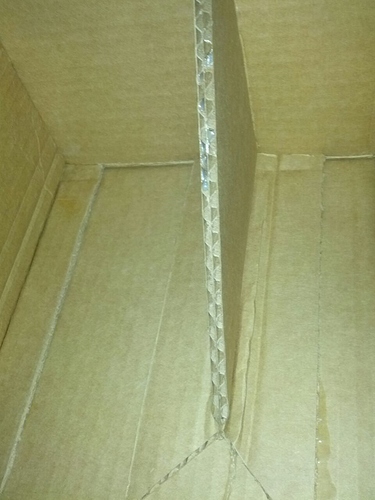 I just built this with some modifications to some instructions I found on the Martha Stewart website. “It’s a good thing.” Most of the mods were to accommodate my larger cats…so I super-sized and also put in more structural supports.

It’s a two level cat house made out of two 18 X 18 cardboard boxes. There is a cut out for the cats to jump up on to the second level. The roof opens up so you can look in or so that cats can pop up and attack you in a surprise offensive.

I will likely cut out more windows. Next, I’d like to make some sort of cardboard cat tank that I could attach to the top of a roomba.

Just bumping this post. This is a great xmas gift for the cat-lover who has everything. It’s also very low-cost to make.

Model it in Fusion360 or SolidWorks and generate some laser files!

Cat hacking would be a great workshop

That would be awesome! Really we should have a cat hacking week sometime in the new year which includes Roomba-tanks for cats, etc. Using a makey makey and the Twitter API to make your cat tweet, etc.

I would just like to know how to get my cats to ride my roomba … then the roomba would have an actual purpose.

Who’s to say that isn’t roughly what Jarrett had in mind as well?

@hectorh I think roast beef is the answer!! @shane I like your style.

Anyone want to making these during the holidays? This would be a great
craft for my daughter.

I would just like to know how to get my cats to ride my roomba … then the roomba would have an actual purpose.

I think you meant to say “the cats would have a purpose”?

You should teach your dog to ride the roomba! That would be the cutest and I might die but it would be ok.

Have you tried superglue?

Just wanted to bump this project because it’s still going strong. All the cats on my floor play in it and it looks pretty much as new except for a few windows that have been ripped out by cats.

I turned a box into a house for my cat about 3 months ago. I wasn’t going to keep it any longer but when I opened it up I saw a lot of cat hair in there. Gave me the idea of maybe adding a comb to the rim of the entrance of the box to see if it could be used to comb more hair from my cat.
She a long hair and hates to be combed so maybe I could get the box to do it for me. Would reduce the amount of hair in the rest of the apartment.

Wow. It’s been a while since I made this. The cats are 7 now and this cat house is still going strong even though Dr. Watson is 13lbs. The modifications I made worked pretty well. See the note on the inner supports in my original post.

Thought I’d bump this thread in case anyone is interested in the plans for this. It’s a great xmas gift for your cat, or cat-person, or the person-cat in your life.

Cost-wise it can be almost free to make if you use recycled boxes. The plans are free. We have lots of clamps and box cutters at the space to make things easier to work on. All you need is glue.

My cats are fickle and don’t spend a ton of time in this now (they used it heavily for about 2 years). I’m hunting around for the next design to make. Maybe a tank?

Edit: another cool idea might be to figure out a way to mount this to the wall…on a shelf maybe?

Thanks @Davonna! Let me know if you fancy making it and I’ll give you a hand.

Just necro-bumping this super old project I made. It lasted for years and my cats really enjoyed it. This would be a nice low-cost gift to make for a friend with cats.