Pre-wound coils for a custom stator

I’ve had a project idea for several months now but haven’t had time and am far more of a computer programming/security guy than electrical engineering/projects. I know enough to fix broken vehicles or electronics but rarely create anything and I’m having trouble finding what I need. There is just one problem part. 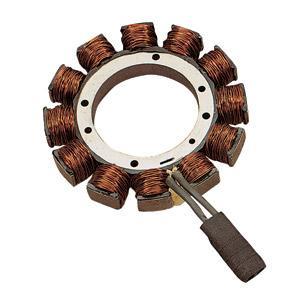 Around the outside of this stator would be a ring of magnets and when running it would spin, causing flux, electricity, etc. What I want to do is, essentially, build one the same size except with the windings turned 90 degrees. For example toward the screen, and the magnets in front of them.

So, I’m going to need to have a bunch of individual coil windings similar to the outside of this device that I can arrange the way I need to for my project. I also would like to find a source that is a bit more reliable than myself hand-wrapping them for reliability, repeatability and I may end up wanting to make several of them if the test version works.

I’ve looked on google for something similar to a 90-degree turned stator that I’m thinking of and it doesn’t exist. Some of you may have noticed why it doesn’t. With the magnets in a ring on the outside the field is really concentrated in the center, and turning it all 90 degrees is going to make it really inefficient. I am aware of this, but efficiency isn’t really a concern as long as it gets just enough power to function. Size and shape are bigger issues.

Anyway, if anyone knows any sites where you can buy small pre-wound coils like this or good devices/components to disassemble to salvage them cheaply that would be great. I’ve tried looking on google on and off for a few weeks when I had time and just keep finding nothing.

This guy likes winding his own, and seems to have pretty good repeatability
and process down:

I think he talks a little about sources in one of his pages, too. The gist
of it is that it’s prohibitively expensive, but there are a couple
companies that will wind them for you.
Not exactly what you’re looking for, but hopefully it’ll inspire you

Thanks, I’ll take a look at it. May learn something if I do end up going the home-wound route but really trying to avoid it if it isn’t too expensive. Just to be clear for everyone, I don’t want a whole custom stator wound up.

Basically I just want a bunch of individual little coils like this: 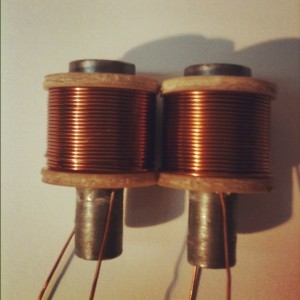 that I can wire up (without an iron screw in the middle). Core should be non-conductive. Just hoping to find something off-the-shelf I can solder together for a few test versions.

If your stilll interested in custom wound coils, I do just that. And, I live in Vancouver. I believe the magnetic topology you are wanting is called Axial Flux. Which, just happens to be my focus specialty. What you are describing can very well be done!. If you care, we can get in touch somehow and discuss some options maybe?

@Natasha_McGill, I don’t 100% understand the details, but I’m fascinated. Would you be interested in doing a small virtual seminar for the VHS members about what it is you do? Maybe show off a few things if you can?

I would love this! I did a prop build of an ironman arc reactor last year, and all I could think about was that it would be so much better to try building one with real coils: