I’m trying to find a local source for a thin 2-way mirror. I have one on the way from smartmirrors.ca, but it won’t arrive until later next week due to delays and I require it for a small infinity mirror project that needs to be complete by Monday. Do any of you have any advice or can point me in the direction of a local supplier in the Vancouver area?

Thanks for reading!
-Matt

Would mirrored window film do the job? (applied over a thin sheet of glass?)

Probably! I didn’t think of that but if I can find window film with ~20% light transmittance that should work well. Thanks for the suggestion!

It’s usually sold in rolls at home depot. The Gila brand is great and very easy to apply.

Hi again @Janet, just wanted to say a huge thanks for the tip! Picked up the Gila mirror film, it had the perfect light transmittance, and fit the project needs perfectly. Much appreciated!!

Hey Matt! That is awesome - so glad that worked out. Post a pic of your project if you feel like it - I’m sure a bunch of us would love to see it. Cheers!

It was actually for my wife’s art project and I was helping to source the 2-way mirror. Here is a pic, doesn’t really do it justice but gets the idea across. It’s about 13" inches tall and 16" wide. 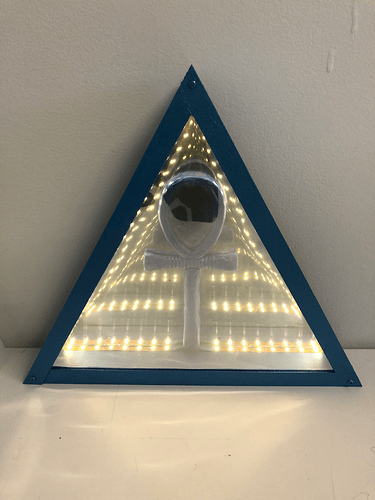 Funny story, this pic actually uses just the film itself for the “glass”. The glass we sourced to apply the film to was from a cheap frame from the local dollar store, and after applying the film and assembling the mirror is all looked great. But then at midnight before the project was due, the film started to cure and exposed this text that was baked into the glass and covered the whole surface. So, the glass was removed, and then the film was cut out and stretched out to function as front reflective pane on its own.

Moral of the story, don’t use dollar store glass for projects, dumpster-dive a glass repair store instead

Thanks! I’ve passed on your compliments, and thanks again for the film tip!