I’m making an LED grow light. I’m using an old PC CPU heat sink, since they are cheap and available. 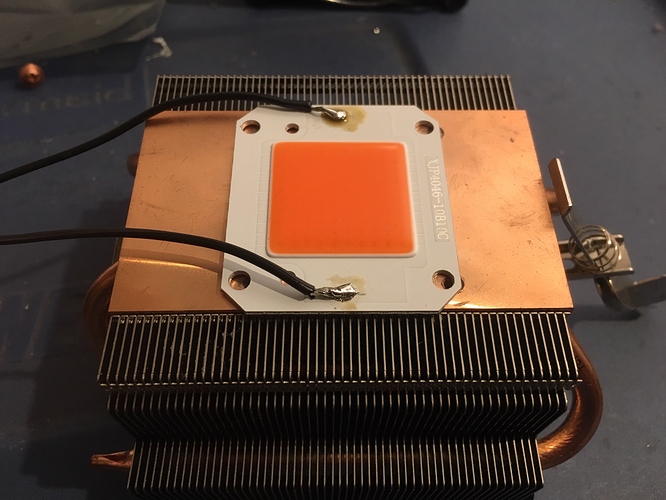 It’s basically just an LED COB that will go on the PC heat sink. I have been drilling holes in the copper and tapping them for screws. I had some luck just tapping with a steel screw, since it is harder than the copper. Unfortunately I drilled one hole a bit too small and tried to force it: 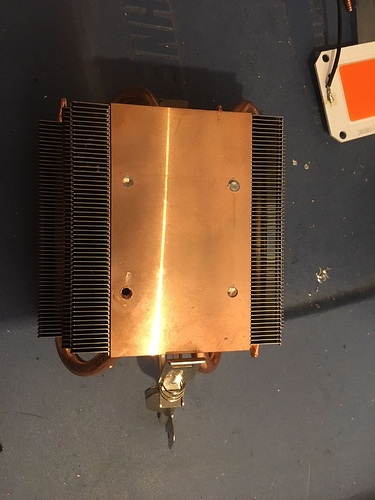 The top right hole in that picture has a screw broken off in it. I really like this heat sink, so I don’t want to scrap it.

Best I can see, I have two options: Leave it and only use 3 screws, or try to remove it and risk messing it up worse.

I’m leaning towards just using 3 screws. The heat sink is rated for 100w+ and the LED COB is only 50W. And the LED presumably emits a fair bit of that as light, whereas a CPU turns it all into heat that needs to be removed. I think it will still make good enough contact. The first one I built only used clips to secure the LED and it handled the heat well enough.

I also don’t really know how I would get that screw out. The diameter of the hole is only 5/64", so I’d need to use an even smaller bit to drill it out. Since the screw is significantly harder than the copper, this might prove difficult. There are tiny screw extractors, but I don’t really want to buy a special tool worth more than the whole project.

I think I have talked myself into just using 3 screws. But if anybody has an opinion, I’d love to hear it.

Try a piece of rubber (rubber band or something similar) on the broken screw and then using a screwdriver on top to try and turn the screw. I know there is no screw head but you may just be able to get some grip with the rubber and pressure of screwdriver. You just need to raise it up slightly and then you can grap the end with pliers to spin it out all the way. Barring that I’d say - don’t worry about it.

Moving the location seems the most efficient way.
If the screw is bothering you, try to find a set of left handed taps or drill bits?
Long time back I bought Left handed tap from Grainger, and was somewhat expensive, but my employer paid for it and was billing the customer for repair time so it was worth it.

I tried a variety of friction-based methods for turning it out. Problem is, it’s mostly smooth and really tightly fitted so I just can’t get it to budge.

Moving the location is a good option. If I move it slightly down the Y axis (according to second picture), I can still avoid the heat pipes underneath. I really want it to be symmetrical, but I might just have to live with it. I’d be hard pressed to even notice while it’s in operation.

I really like those left-hand drill bits! I was not familiar with those, thanks for the link. I might have to order some of those.

Thanks for the input, everyone. Hopefully I’ll be working on this tomorrow at VHS. I’m new around here, if you see me feel free to say hi!