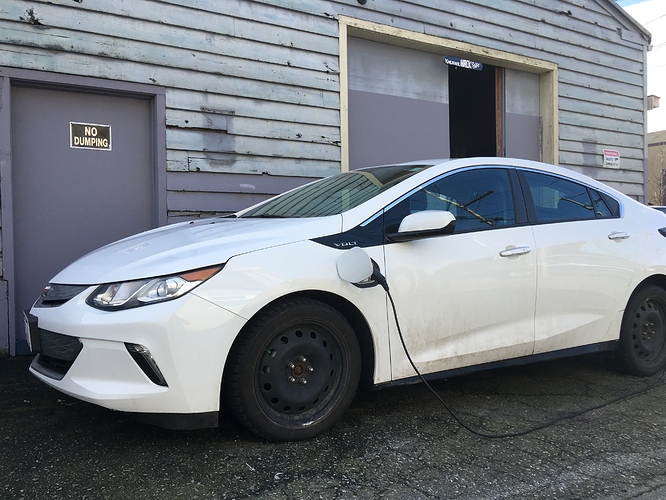 I’ve been spending a lot of time at VHS during the day lately, and plugging in my electric car while I’m working. It works really well - I can close and latch the sliding doors with the cord running outside. I’ve logged the kWh I’ve used (124 kWh so far) and calculated that to be $15.54 based on the BC Hydro commercial rate of $0.1253/kWh.

I happen to have a spare 30A EVSE (the person I bought my car from threw it in). I’d be willing to make that a semi-permanent loan to VHS to install it just inside the bay doors (beside the 3ph panel). It’s a “dumb” EVSE, so users would need to self-meter and reimburse. If we feel we would need something more complicated, I could sell this one and get an OpenEVSE, with metering and billing via our membership management software. That’s possibly a pipe dream, but any interest in all this? If not, I’ll just keep on doing my thing and reimbursing for the energy I take. I don’t have an EV car, but I will chip in, because I want to build it. 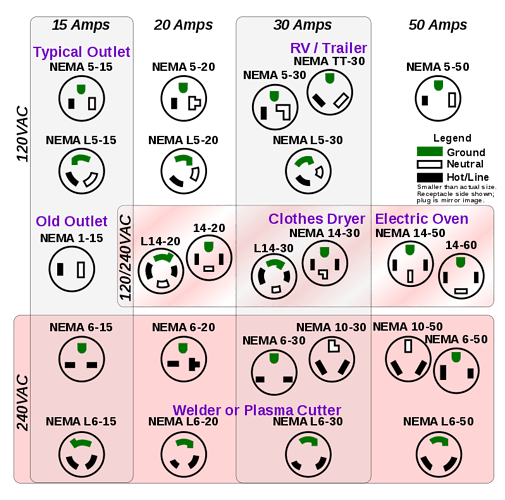 I will drop in $50 towards the

I did not respond to this, but I am quite interested in this. I’m also happy to reimburse at above market rate to VHS as a thank-you. Is it too late to add an extra 40 amp circuit to the 3 phase for your 30A EVSE?

I have this Schneider Evlink 30A EVSE which I can give on long-term loan to VHS. It does not have any smarts, so I don’t think there’s an opportunity to do any logging or authenticated activation system. Unless we do that upstream from this device.

I think we can start with this and replace with a smarter charger later if we want.

It is an indoor charger, so we have to keep it indoors, but there’s enough clearance for the cord to go under the sliding doors. That leaves only two practical places to install it: 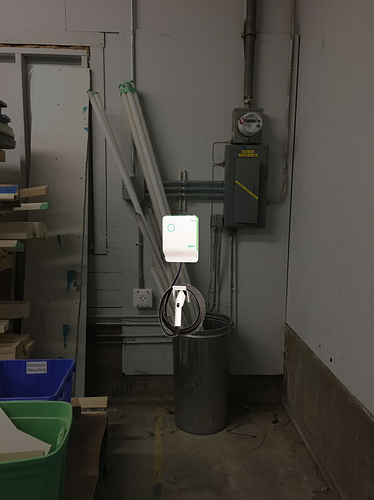 We would just need @KittyCat to replace that receptacle with a NEMA 14-50, and replace the 30A breaker with a 40A one.

Downside is that it’s about 8 feet to the door, and the charge cord is 18 feet, leaving only 10 feet to get to the charge port. This is doable but means you don’t have much margin for how to park. 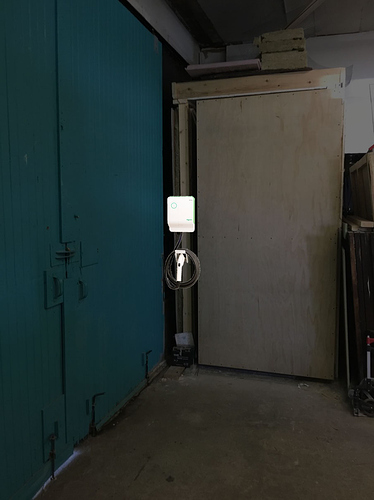 I don’t know what the plan is to finish off the big soundproof box, but it looks like it might be possible to mount it as shown, depending on what other construction is planned on this door.

This would give an extra 5 feet of cable to get to the car’s charge port.

The charger can be fitted with a NEMA 14-50 “range plug” or could be hardwired in.

Late to the party, but have you looked at Zapbc? There’s a grant for a charger there

I think that settles it. Let’s go with option 1.

I have some 10ga wire kicking around if you all need to to move that charger to a more convenient location. Maybe 7 or so meters.

I’ve proposed option 1 to John who’s project managing the electrical upgrade. If there’s room in the budget then great. If not, we’ll leave things as-is.

I will kick $100CND towards the opensource smart charger, wifi kit.


Which is only $219USD
But it looks like full kit with the car EV plug is more.

Why it is opensource, hackable. And because we could arrange wifi user sign in for usage tracking and email notifications for billing.

How much electrical cost is this adding for VHS/Bobby’s work?

If hes already there, I can’t see it being more then an hour. I hardwired my ChargePoint charger in about an hour from an existing 220v run. If it’s close to the panel. Then a bonus.

Bobby has quoted us an hour and we have a member that has offered to cover that cost.

Awesome - can we just get a summary of what’s happening? It’s not entirely clear. I know from chatting to Mike that installation is covered (awesomenessness).

Will this be open to the public or is it members only? Is there a long term plan for covering authorization and direct payment? Thanks for making this happen.

Yeah there was an indication by other directors that the hour of labour to make this happen is ‘unnecessary’, which seems unreasonable to me so I’m covering the labor. With Mike covering materials and Luke lending the charger, there’s no cost to VHS.
This quick upgrade will keep the door open for installing a smart meter down the road and offer EV charging tied with member account billing for electricity cost. It would be members-only and I see this being an interesting feature for new members long term. As Mike mentioned we can also list it as a restricted charger on various sites that directs people to our website, open nights, etc. Overall seems like a worthwhile opportunity.

Thanks for the update, that’s great and makes things much more clear.

I have a small amount of 8/3 Teck cable, ~15 feet, that I can donate to the cause. Let me know if you want it and when and I can drop it off.

And I can chip in some cash.

I was in Tuesday evening and left my Teck cable against the wall by the sliding doors under the electrical panel.