So as many of you are aware we received a donation of a metric fuck ton of drill batteries recently. Here is some info that might be helpful in the near future:

First thing you’ll notice: these are counterfeit DeWalt Max 20V cordless tool batteries. @TristanL was kind enough to open one up for us to look at. Each battery contains 10pcs 18650 lithium cells of unknown origin (can you find any info on these?) 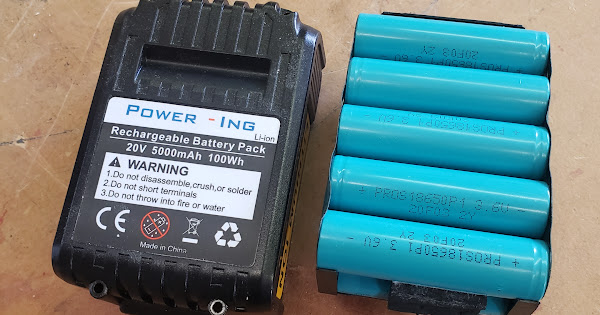 Secondly, by sheer luck we actually have 2 DeWalt chargers (one belongs to @Metal_Janet) at VHS that can charge these batteries. 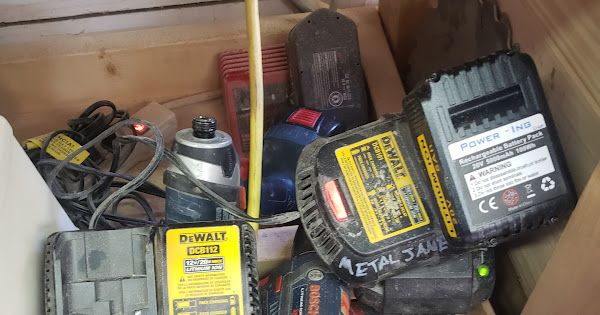 How do we want to use these batteries? I’ve heard several good suggestions so far, but let’s make a group decision

VHS can build replacement roomba battery packs for the vhs roombas. I’m sure they are in need.

Note: not sure what state they are currently in - would likely need cleaned-out/maintenance/possible IR repair also. VHS has all the parts for that.

I found an Amazon link referring to a battery pack with 5 cells and that one referred to 2500mAh/20V/50W battery pack. This leads me to believe that - if I’m not mistaken - they’re in a 5S/2P configuration, which would match the configuration in the battery pack.

That review - which I’m not going to link - mentioned terrible performance:

My guess is that they’re of varying quality (ahem) and that we might as well take them apart for QA and build stuff with them.

quick questions that tangentially relate to these batteries:

where is the spot welder that is now on loan to the space?
do we have any nickel strips, or would I need to get some?

I’ve found that both Roombas, Dustin and Buffy, seem to be working reasonably well. I emptied them out and shook out their filters. Yeah their batteries probably aren’t in the great shape, but in my experience they seem to get stuck (usually on the ramps/inclines in the space) well before their batteries run low. That said, if you’re wanting to rebuild them, I think that would be a good project proposal for these batteries.

The spot welder is in a plastic toolbox underneath the electronics bench. I’ll throw a bigger label on it. Lee’s has the shrink tubing for lithium batteries; they probably have the nickel strip too. If we’re looking at doing this as a routine thing in the space it might be worth doing an aliexpress order for battery building supplies.

Nice sleuthing. Yeah, tearing these down seems reasonabobble to me. Now keep in mind that everything that came in this donation was in brand new condition, if that helps us to QA sort the cells.

Seems good to hold off for now then if they are still doing their thing.

The review mentioned just one of the cells being dead. So it’s kind of a mixed bag as I understand it. Not sure how we can effectively test/sort the bad ones though. Maybe they’ve been bad to begin with. I guess there are chargers do that an analysis though.

Curious how we can tell that these are counterfeit?

Well they don’t say DeWalt on them, but one of their suppliers shipped them to them saying they were.

Looks like an opportunity to build a capacity tester.

That would be good. @TristanL istan said he has one that he can use to test one of the packs. If we’re testing all of the packs though, then maybe VHS should have one too.

The battery Spot Welder belongs to the space now. I’m happy to have donated that.

In the battery spot welder tool box also has some nickel strips and shrink sleeves. Some people have been working on making battery packs so some of the nickel strip may have been used up. I can check today when I’m at the space if we need to buy some more.

So I capacity tested one of the cells, I got 2086mah at 0.2a and 2076mah at 0.4a. Not great, but not terrible if they hold up under large discharge currents.

i’d be interested in scavenging some 18650 cells from these packs, to try and build a 36v or greater battery pack to drive a pair of hoverboard motors i’m playing with.

I’d also be interested in simply helping to disassemble the packs for others, I’d heard tell of a group forming to do so? how do I get involved with that?

There is a wiki guide written with some instructions on how to harvest the cells. However there is significant concern over the fire/explosion/toxic fumes hazard if an accident were to happen.